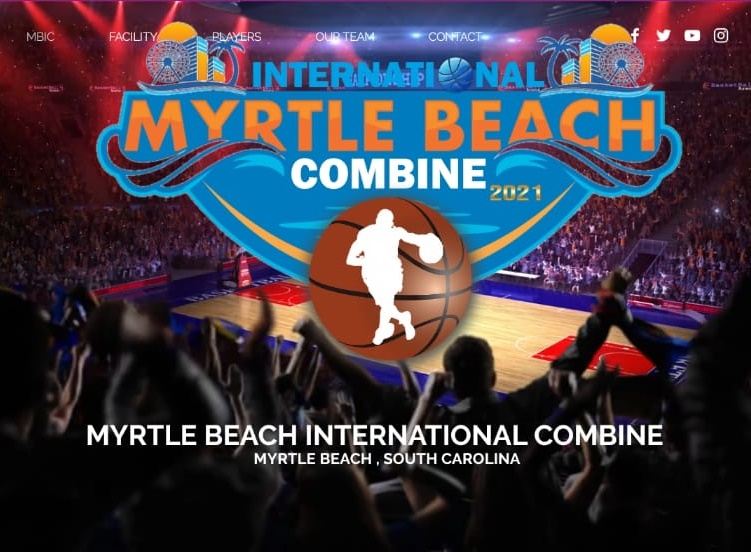 We are glad to announce that the upcoming Myrtle Beach International Combine will be will be held June 13th – 15th 2021 in the Sports Center Way, Myrtle Beach, South Carolina , showcasing 50-60 top college basketball players and international prospects in Myrtle Beach, South Carolina. MBIC will handle all aspects of the event, introducing a new approach to basketball invitationals.
MBIC will be essential in securing worldwide professional offers for dozens of American and international basketball players; extending invitations to all 30 National Basketball Association (NBA) teams as well as EuroLeague teams, such as Spain, Turkey, France, Italy, Israel, Russia, Greece, China, South Korea, and Japan. MBIC will include 60 participants who will be physically assessed, coached through two days of drills, and organized games by former head and assistant NBA coaches.
Coaching Staff
The MBIC coaching staff will include coach Bill Bayno who has served as an NBA assistant coach for 15 years and head coach for the University of Nevada, Las Vegas Rebels. Bayno worked as an assistant coach for five years with the Portland Trailblazers, two years with the Minnesota Timberwolves, two years with the Toronto Raptors, and recently ended a six year tenure as the assistant coach with the Indiana Pacers. Coach Ty Ellis has substantial and impressive coaching experience. He has provided leadership in six assistant coaching positions and has held two head coaching roles, most recently as the Head Coach of the Stockton Kings. Aside from developing and coaching over 15 players that were called up to the NBA, Ellis also collaborated with Jeff Van Gundy and Sean Ford in putting together the 2017 FIBA AmeriCup team who became gold medalists.
Ty Ellis integrates his years of experience on the court as an NBA & International athlete with his span of coaching experience off the court to make an immeasurable impact on players and others within the basketball community. He has held the role of Lead Clinician at the NBA China FUSC Coaches Clinic in Hangzhou, China as well as served as Camp Director at both the Jr. NBA Youth Academy in Shanghai, China and the NBA G-League Elite Camp & Next 40 Combine in Chicago, Illinois.
The Myrtle Beach International Combine is a basketball invitational that provides detailed evaluations of participating players, founded by former professional player and former NBA scout, Pete Mickeal. The MBIC will be managed by Mickeal alongside other professional directors and advisors who have worked in various capacities within the basketball industry, contributing substantial experience to the combine. The Myrtle Beach International Combine will be the most significant event of 2021, featuring potential NBA draft picks and future NBA & international stars in a competitor-focused, results-driven environment. Through the introduction of this new basketball invitational, MBIC’s intention is to be profitable and sustainable, provide exposure to talented players seeking contracts in the NBA and elsewhere, and to bring a unique basketball experience to Myrtle Beach.
MBIC is comprised of experienced professionals, who have esteemed relationships with college players, coaches, and numerous professional basketball leagues around the world. These mutually beneficial relationships will be instrumental toward building a prominent reputation and providing student athletes and charitable organizations opportunities for the future. MBIC will also lead in the unification of diverse partners for a common goal and collaborations with lesser-known non-profits and partners in strategic efforts to provide support, assist in initiating grants, and securing financial endowments for needed programs and social issues.
For more information about facilities, amenities and further information, do not hesitate to contact Pete Mickeal on This email address is being protected from spambots. You need JavaScript enabled to view it., or Giorgio Zambellis on This email address is being protected from spambots. You need JavaScript enabled to view it.